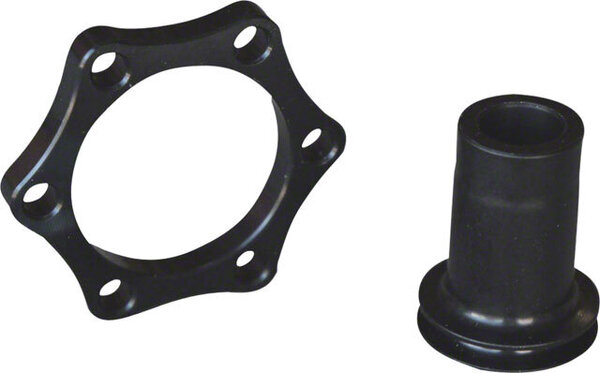 While incremental, the benefits of the "Boost" 15x110mm front and 12x148mm rear axle standards are clear: better clearance for fatter tires & rims and reduced dish for stiffer, stronger wheels. The big bummer? Taking full advantage requires not only a new frame and fork, but new wheels as well.

In response, we have developed the Boostinator. When paired with compatible 15x100mm or 12x142mm hubs, Boostinator kits allow existing wheels to be mounted in Boost-standard frames and forks. Disc and drivetrain positions are maintained and, thanks to a quick re-dish, spoke bracing angles are improved.

Boostinator kits consist of a specially-designed axle end cap and, in the case of rear kits, a precision-machined rotor spacer with a set of six high-strength bolts. In keeping with Boost specifications, the disc and cassette are shifted outboard, allowing brakes and derailleurs to function as designed.

- Front boostinators are only an endcap and do not require a rotor spacer. The wheel is re-dished.
- Rear boostinators require both a re-dish and rotor spacer.
- Rear Boostinator kits are not approved for rotors larger than 183mm.
- Hubs spacing is 100mm front and 142 rear, and the Boostinators make them 110 and 148 respectively.
- Compatible with 6-bolt FRONT wheels and SOME centerlock models.
- Compatible with ONLY 6-bolt REAR wheels (there is no way to space centerlock rotors over 6mm).
- NOT recommend (or safe) for non-symmetric lacing like the 2:1 lacing found on some of Industry Nine's wheels.

*Note: You will need to re-dish your wheel after installing any Boosinator.

Boostinator DR:
- The Boostinator DR is compatible with DT-Swiss 12x142mm Star Ratchet (240- and 350-series) rear hubs with 6-bolt (IS) rotor mounts.
- Centerlock hubs are not supported.
- 180- and 190-series hubs are Centerlock only.
- The Boostinator DR is also compatible with some complete wheels from DT Swiss, Roval (Specialized), Giant, Syncros (Scott), and others that use DT's Star Ratchet internals.
- Remove the disc side end cap. Bearing size 6802 15x24.
- Net weight: 18g